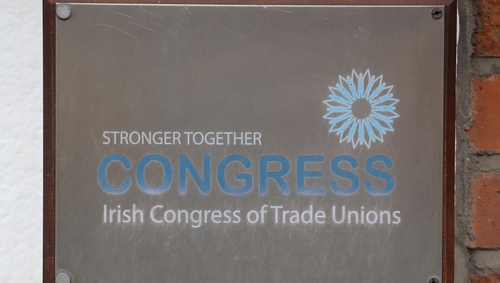 Public service unions affiliated to the Irish Congress of Trade Unions today (Tuesday) endorsed a new public service agreement after 13 out of 17 unions in the sector, which collectively represent the overwhelming majority of Ireland’s public servants, backed the deal.

The package, called Building Momentum, was formally ratified at a meeting of ICTU’s Public Services Committee (PSC) this morning.

The agreement, which comes into force with immediate effect and runs until December 2022, includes modest pay increases skewed towards those on lower incomes, measures to address important remaining issues from the last financial crisis, and a mechanism for sectoral bargaining drawing on a a ‘sectoral bargaining fund,’ initially worth 1% of basic pensionable pay during the lifetime of the agreement. It retains strong protections against the privatisation and outsourcing of public services.

Building Momentum also acknowledges the recent “unprecedented display of commitment, flexibility, hard work and agility in public service provision” and commits the parties to harness this momentum to meet challenges including the continuing response to Covid-19, a return to normal delivery of health and education services, Brexit, digitisation, and establishing the public service as the driver of best practice on remote working.

Fórsa general secretary Kevin Callinan, who chairs ICTU’s Public Services Committee, said ICTU-affiliated unions were committed to the full implementation of the agreement which would bring tangible benefits to those who use and provide public services. “The pay terms represent a realistic and acceptable approach to incomes, and they are substantially skewed towards lower earners in a very challenging context of limited resources,” he said.

SIPTU deputy general secretary John King, who is secretary to the ICTU PSC said: “From the outset of our membership consultations, it was clear that there was a real appetite to reject austerity agreements, and improve and progress pay while protecting public service delivery and public service jobs. There was also a demand to try and find a way to deal with grade-related pressure points, without undermining a collective agreement. This short, two year agreement can deliver on these objectives while providing security in times of great uncertainty for all workers across public service.”

INTO general secretary John Boyle said: ““While the pay increases of 1% per annum are modest, the addition of €500 per year to salaries below €50,000 is appropriate particularly for those in the early stages of their careers. The inclusion of a sectoral bargaining fund of 1% of payroll is vital to allow unions to address a range of long-standing claims by next February.”

INMO general secretary Phil Ni Sheaghdha said: “From meeting with our members across the country, it is clear that the main issues for them were restoration of hours to pre-2013 levels, safe staffing, and funds to deal with nursing management outstanding claims. The challenges to retain staff in our health services are real. All aspects of this agreement must be fully implemented over its two-year lifetime.”

The PSC officers are now in discussions with senior officials at the Department of Public Expenditure and Reform (DPER) about the implementation of elements of the deal, including the establishment of the processes to address additional working time introduced under the 2013 Haddington Road agreement and to establish bargaining units in relation to the deal’s sectoral bargaining provisions.

The main features of Building Momentum include:

·       A general round increase worth 1% of gross pay or €500 a year, whichever is the greater, on 1st October 2021. This means those on lower incomes will receive a significantly larger percentage increase than higher paid staff.

·       A second general round increase worth 1% of gross pay or €500 a year, whichever is the greater on 1stOctober 2022. This means those on lower incomes will receive a significantly larger percentage increase than higher paid staff.

·       Provision for the equivalent of a 1% increase in annualised basic salaries through a ‘sectoral bargaining fund’ (see below) on 1st February 2022.

·       The establishment of a ‘sectoral bargaining fund,’ initially worth 1% of basic pensionable pay during the lifetime of the agreement, to deal with outstanding adjudications, recommendations, awards and claims, with the option for groups to use the available allocation as a sectoral pay round.

·       Recognition that certain measures introduced under the Haddington Road agreement (HRA) “are to be addressed and implemented” including:

·       The establishment of an independent body by the end of March 2021, to make recommendations to begin the process of returning to pre-Haddington Road hours, with €150 million available to commence implementation of the outcome during 2022, and provision for a successor agreement to engage on the roll-out of additional recommendations.

·       Measures to address the ‘new entrant’ teacher issue, which will see those recruited since 1st January 2011 move from point 11 to point 13 of the pay scale, or move up one additional point.

Maintaining the momentum for reform

·       Acknowledgement of the recent “unprecedented display of commitment, flexibility, hard work and agility in public service provision” and pledge the parties to harness this momentum to meet the immediate challenges of 2021 and 2022, including the continuing response to Covid-19, a return to normal delivery of health and education services, including addressing challenges that arose for children during the crisis, managing the response to Brexit, establishing the public service as the driver of best practice on remote working, and addressing digitisation.

·       Measures to harness the potential for technology to improve service delivery.

·       Measures to improve access to services through reformed work practices, including enabling temporary reassignments where necessary and increasing the movement of staff across the public service where necessary.

·       An implementation and reporting mechanism to ensure delivery of agreed reforms, including through sectoral action plans.

·       The agreement retains existing safeguards on any proposed outsourcing of public service provision.

·       The agreement sets out a detailed dispute resolution process, including an “industrial peace” clause in line with previous public service agreements.