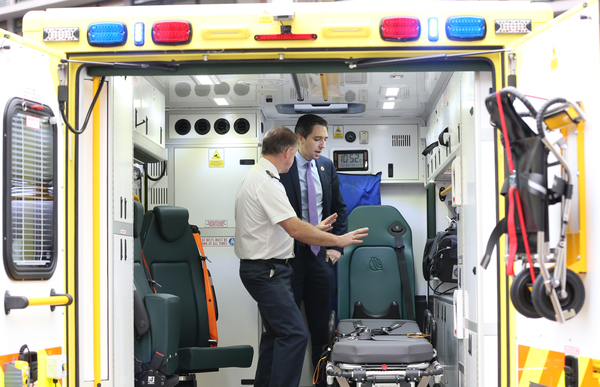 SIPTU representatives have today (Sunday, 5th January) said that the overcrowding crisis in emergency departments is causing chaos for ambulance professionals across the country.

SIPTU Health Division Organiser, Paul Bell said: “SIPTU representatives are demanding that the Minister for Health, Simon Harris, the Department of Health and the Health Service Executive (HSE) take immediate and effective action to relieve the immense pressure being experienced by ambulance professionals across the country. At the end of November, SIPTU representatives requested that the HSE and Department of Health agree a protocol for the handover of patients at emergency departments. Unfortunately, our calls were ignored and now we have an unacceptable situation where our members are reporting delays in some cases of between three and a half and seven hours outside emergency departments as our now annual winter overcrowding crisis bites. It is outrageous that in 2020 Ireland patients are being treated in the loading bays of hospitals instead of hospital beds. This is not what quality patient care looks like, and this kind of chaos is starving communities of a safe and functioning ambulance service, particularly in areas of the west of Ireland and in the midlands.”

“While the HSE and Department of Health are responding to some areas of the overcrowding crisis, primarily by attempting to boost the number of beds available in hospitals there seems to be little consideration or emergency planning to make sure ambulances are kept on the road and readily available for communities. Over the weekend, we had the absurd situation where SIPTU members working a 12 hour shift in an ambulance base in County Clare were dispatched on a 901km roundtrip to Clonmel and back to Youghal due to local resources in being held up in Tipperary while ambulances from Kilkenny bases were dispatched to emergencies in Cork. This chaotic system is not only bad for patients and driving up ambulance waiting times it is also having detrimental effect on the health and wellbeing of our members with many ambulance professionals continuously exposed to long shift over-runs and unsatisfactory rest and break times.”

He added: “SIPTU representatives have also written to the Director of Ambulance Services and representatives of the Department of Health to request an urgent meeting to highlight our members’ deep concerns and to seek assurances that all is being done to prevent this crisis from spilling into more communities.”

Patrick Cole
Connect with Me: