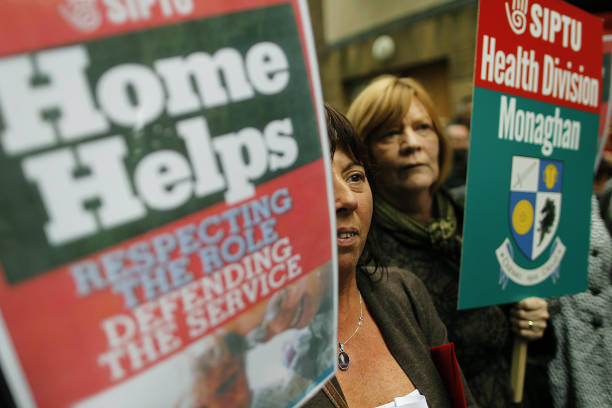 JLCs are good for workers and the economy

Joint Labour Committees (JLCs) are made up of representatives of employees and employers and set minimum wages and working conditions across various employment sectors of the economy.

They originated in Ireland over a hundred years ago, retained by the independent state and went on to eventually cover a range of industries including hotels, catering, contract cleaning, retail, agriculture and other low-paid sectors.

In 2014, the Government and the Oireachtas renewed the JLCs after they were struck down by the High Court. However, some employer organisations have blocked their operation. They do this by simply refusing to participate in the JLCs.

This has resulted in low wages, poor working conditions and exploitative business practices in those sectors, notably in the hotels and hospitality industry – the same problems that gave rise to their introduction more than a century ago.

The Industrial Relations (Joint Labour Committees) Bill 2019, proposed by Senator Ged Nash of the Labour Party, if enacted, will ensure that the functioning of JLCs cannot be obstructed. It would allow the Labour Court to make its own binding proposals in sectors where either the employer or employee representatives refuse to engage in the JLC.

This would allow the JLCs to operate as the Oireachtas intended them to and would be a strong incentive to employers to end their obstructionist tactics.

JLCs can raise wages and working conditions for all workers across a sector. This stops one business from undercutting another by paying lower wages. This protects both workers and businesses from ‘race-to-the-bottom’ exploitative practices.

The effective operation of JLCs is also good for the wider economy. Low pay is a drag on public finances. JLCs can help improve public finances. Increasing wages and working conditions boost tax and PRSI revenue while reducing social protection payment that are needed to subsidise low pay.

It is not just about wages and working conditions. JLCs ensure workers are provided a voice in their workplace. Though their union representatives, they can participate in negotiations over their contracts. Such voice and participation is the essence of democracy in the workplace.

Business productivity can also be increased by effective democracy in the workplace. Sector-wide collective bargaining reduces turnover and avoids conflict on the workplace floor.

Costs are lowered while income rises for businesses. Collective bargaining respects the skills and competences of each worker which, in turn, ensures that businesses can attract and retain employees in their workplace.

JLCs represent a new type of flexibility in the modern economy. Some employers can face real difficulties in the competitive market. There are ‘inability to pay’ clauses in the JLCs to protect them. Just as importantly, collective bargaining helps ensure that employee and employer representatives can more easily reach solutions as each side knows what is necessary for business survival.

Everyone who works hard for a living should be able to take home a Living Wage. This should be the measure of a decent society and this Bill will assist the nearly one quarter of workers in Ireland who are on low pay.

SIPTU fully supports The Industrial Relations (Joint Labour Committees) Bill 2019. We call on workers and trade unionists – especially those in the sectors that will directly benefit from the legislation – to contact politicians and ask them to support this Bill.

Politicians that do not support a realistic measure to raise the income floor for the lowest paid workers in the country, including those in the hospitality and contract catering industry, should pay the price when the next election comes around.