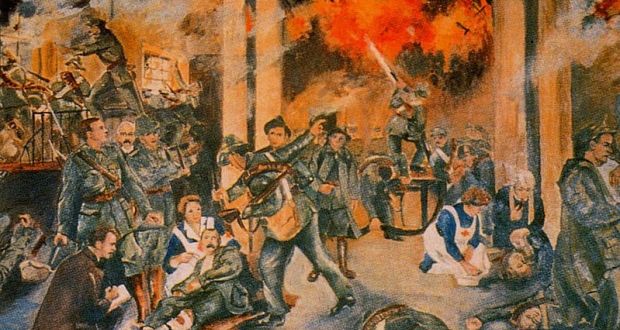 John Redmond, rallying Irish men to the British war effort, was thinking only in terms of the impact on Irish-British politics of such recruitment. He seems to have been entirely unaware that the first World War was a contest between empires for the control of resources, for the extension of imperial powers, and that he was recruiting Irish men to support and bolster imperial ambitions and greed.

Or perhaps he knew but didn’t think it was important. A similar charge, however, can be laid at the door of the IRB and the Irish Volunteers — they failed entirely to consider (and potentially profit from) the international context of the insurrection. Only James Connolly fully understood that Ireland’s struggle against Britain was a struggle against empire.

In the Workers’ Republic, on 8th April 1916, 16 days before the Rising, Connolly wrote:

The power which holds in subjection more of the world’s population than any other power on the globe, and holds them in subjection as slaves without any guarantee of freedom or power of self-government, this power that sets Catholic against Protestant, the Hindu against the Mohammedan, the yellow man against the brown, and keeps them quarrelling with each other whilst she robs and murders them all — this power appeals to Ireland to send her sons to fight under England’s banner for the cause of the oppressed. The power whose rule in Ireland has made of Ireland a desert, and made the history of our race read like the records of a shambles, as she plans for the annihilation of another race appeals to our manhood to fight for her because of our sympathy for the suffering, and of our hatred of oppression

Connolly’s point here was that Ireland was neither alone nor unique in suffering under empire, and by and large, until very recently, Irish commentators have failed to place Ireland’s struggle in this international context.

Paradoxically, all across the world, the Irish Rising, and subsequent War of Independence, had a galvanising and morale-building influence on contemporary and subsequent independence movements.

In an excellent article on this very subject Liam Ó Ruairc argues that: “The 1916 Easter Rising had a very significant impact and influence on antiimperialist movements worldwide, at the time particularly on those in India and Egypt.”

The British were well aware of the consequences of losing Ireland, consequences that were not always clear to most of those Irish fighting for independence. Ó Ruairc quotes Chief of the Imperial General Staff, Field-Marshal Sir Henry Wilson, saying on 30th March 1921: “If we lose Ireland we have lost the Empire.”

And, Sir Edward Carson: “If you tell your Empire in India, in Egypt, and all over the world that you have not got the men, the money, the pluck, the inclination and the backing to restore order in a country within 20 miles of your own shore, you may as well begin to abandon the attempt to make British rule prevail throughout the Empire at all.”

The fact is the Rising signalled, perhaps even began, the process of disintegration in the British empire — but this has not always been acknowledged in Ireland, and in certain sectors, I suspect, remains an unwelcome thought. There has always been a double pulse in Irish political life.

On the one hand we find a servile tendency on the part of political elites to seek the approval and patronage of larger powers, exemplified in the acceptance of direction from the ECB, for example, or the unwillingness to assert our sovereignty in the matter of US troop movements, and renditions, through Shannon.

On the other hand, there is a generous willingness on the part of non-State formations to identify with and support liberation movements, social and political, throughout the post-colonial world.

It would do us no harm at all to consider the international context and consequences of the Rising, and to ask ourselves where we place ourselves now in the ongoing contests between great powers and sovereign peoples.