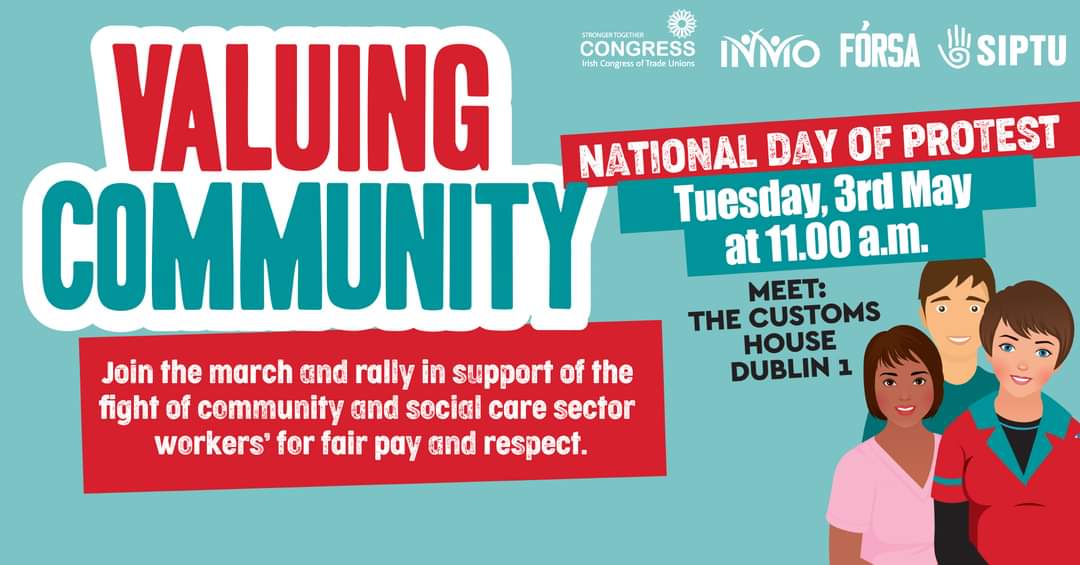 A national rally will be held in early May in support of SIPTU members in the Community and Voluntary Sector, some of whom have not received a pay rise in twelve years. Many workers in this sector are also precariously employed with little or no pension cover or sick pay.

The national rally will assemble at 11.00 a.m. on Tuesday, 3rd May at the Customs House, Dublin 1 and march to Leinster House, Kildare Street, Dublin 2.

These workers provide some of our most vital community and care services including care for persons with a disability, the elderly, vulnerable families, meals on wheels and young people.

SIPTU members have given an overwhelming endorsement of the proposals in Building Momentum – A New Public Service Agreement 2021-2022.

Union representatives approached the talks with a clear indication of what our members sought from a future public service agreement.

This was based on motions submitted to Biennial Delegate Conference in October 2019 and consultation meetings with activists in January 2020 before the onset of Covid-19.

It was clear members wanted to move away from austerity agreements, achieve income progression and hold on to the protective clauses on outsourcing with no compulsory redundancies.

There was also a demand to try and find a way to deal with grade related pressure points – without undermining a collective agreement.

The new Agreement provides for pay increases weighted in favour of the lower and middle income earners while protective provisions were maintained. Overtime rates, twilight shift premiums and the tool allowance are restored while a mechanism has been secured to deal with the additional unpaid hours.

A bargaining fund has also been established.

While modest, progress was made on our members’ key objectives, particularly with the restoration of the additional cuts (overtime and premiums ) and the process to deal with the additional hours.

The bargaining fund will present a pathway to enable unions and bargaining units commence some of this work.

Due to Covid-19 restrictions, the timing and process of negotiations of this agreement were not normal.

Communications and consultations with members were different and difficult at times but judging by the tens of thousands who took part in both the consultation process and the postal ballot, the process clearly worked.

The vote was an overwhelming 91% in favour of the proposals.

Union negotiators will take this mandate to the next meeting of the ICTU Public Service Committee where the votes of all public service unions will be aggregated.

If accepted, it is vitally important that we work together to ensure that the benefits of the agreement and its protective clauses are maximised to greatest possible extent for the benefit of SIPTU members.

This is a short, two year agreement and we hope to be back in talks within 18 months with new proposals to advance pay and conditions in the public service.

Hopefully, they will take place in a non-Covid environment and an improved economic landscape.