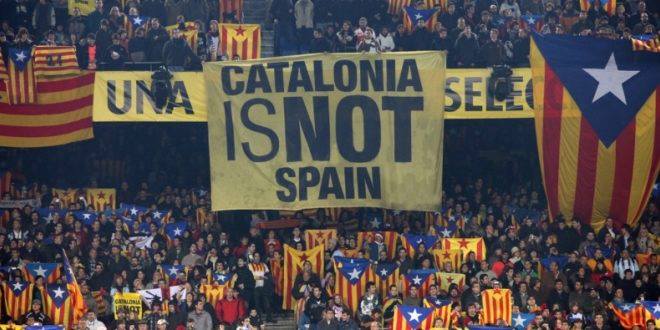 Wrapped in the flag

I HAVE these images in my mind. As a six year-old, I used to sneak into my front room where we had two pictures hung on the wall. Not a Rembrandt, which we couldn’t afford in a council house, but a picture of the Sacred Heart of Jesus and a smaller picture of Padraig Pearse.’

So began Republic of Ireland manager Martin O’Neill in his 2008 speech at Áras an Uachtaráin on the theme of being Irish. The Derry man is a pivotal figure in this island’s football and cultural history. The first Catholic to captain the Northern Ireland national side he can remember being booed onto the pitch at Windsor Park, though that soon stopped when his ability began to show.

He now stands on the verge of leading the Republic to two major tournaments in a row — thanks to a fellow Derry man’s goal in Cardiff. Meanwhile, another Northern Catholic called O’Neill aims to do the same in Belfast this November. Football in Europe has always had to navigate the tricky waters of European nationalism.

Thirty-five European countries competed for the right to reach Italia ’90. This time around, three decades of collapsing political blocs and national awakenings later, the list had grown to 55.

A few days before the continent’s star players departed their clubs for international duty, the Catalan independence referendum once again pushed football and politics awkwardly together.

With the Guardia Civil running riot in the streets outside, FC Barcelona, that great symbol of modern commercialised football and Catalan nationalism, juggled its dual responsibilities to Nike and its membership by succumbing to a middle-of-the road gesture of defiance by closing its gates to fans for a league match to a Las Palmas side which had arrived with Spanish flags embroidered on their jerseys — if Barca had refused to play they would have lost six valuable league points.

In the post-match interviews Gerard Piqué, a Catalan who came up through the youth ranks at Barcelona and who has a European and World Cup winner’s medal for Spain, broke down in an interview with the media when questioned over his emotional reaction to the police violence of the preceding days and suggested he would leave the Spanish national side if the manager felt so inclined.

Fast forward a few days later and the inevitable boos ring out from Spanish supporters towards Piqué as he takes the field for Spain. By the end of the week, Spain had qualified comfortably for next summer’s tournament but the unity of the national side that swept all before them under the reign of Luis Aragonés seems to have been dealt a blow.

Before Euro 2008 it was Aragonés who christened the team La Roja simply meaning “The Reds”, a contentious term in Spain given the country’s political make-up, where to be a La Roja was traditionally to be communist and anti-Franco.

The now deceased Luis Aragonés was no left-winger and denied any political connotation in the nickname but to those looking for one, it seemed like an olive branch. In the Franco era the Spanish side developed a style of football known as “Furia Española”. It was chest-out arrogance. When the side played, the Basques, Galicians and Catalans looked the other way.

Under Aragonés they developed “tika-taka” — a variation on the Dutch concept of Total Football; it endeared the Spanish to the world.

As the Spanish team tika-taka’d its way to victory in Vienna, Kiev and Johannesburg the world looked on at a “new Spain”, symbolised by Basque, Catalan and Madridista footballers celebrating while wrapped in their regional flags but playing under the Spanish banner. Finally, Spain was done with civil war politics and reconciled as one in harmony, rather than under Franco’s jackboot.

The media demands a simple narrative to explain complex topics such as Spanish nationalism. In Luis Aragonés’ national team they had found one.

Next summer, ‘‘both Irelands’’ could again be competing side by side at a major tournament, with players from the North coming from the two historical traditions on the island.

If so, the media will use the imagery to paper over the cracks. But as Spain and Catalonia have shown, there’s only so much smiling footballers can do for society.