SIPTU representatives have today (Thursday, 24th September) demanded an urgent meeting with the management of the Health Service Executive (HSE) overthe concerns of union members over its ability to deliver on the effective implementation of the Winter Service Plan 2020.

SIPTU Deputy General Secretary for the Public Service, John King, said: “The Health Service Staff Panel of Trade Unions has written to the HSE seeking an urgent engagement to discuss the significant and justifiable concerns of our members over the effective implementation of the Winter Service Plan 2020. While the publication of this long overdue plan is to be broadly welcomed, we believe that the devil is in the detail and that unnecessary time has been lost by the delay in its publication. Ultimately, the purpose of this engagement will be to nail down how the goals of this plan are going to be realised fairly and effectively.”

He added: “Our members have been working around the clock throughout this pandemic and are coping with ever increasing demands and chronic fatigue. The winter season is now upon us and these essential frontline workers need guarantees that existing staff will be supported through adequate recruitment plans, investment in critical infrastructure, increased capacity levels and thesufficient resources required to keep our health service going through what will be a long and challenging winter for all.” 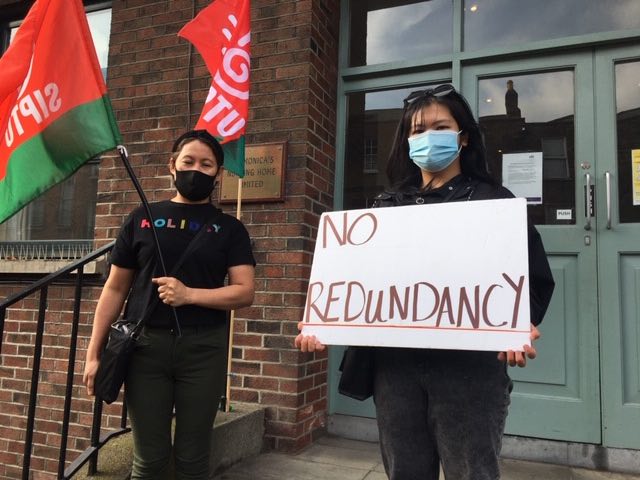 Sisters of Charity workers gathering today (Friday, 18th September) for socially distanced protest outside St Monica’s Nursing Home in Dublin have said that their #PayUpSisters campaign will continue until a just and reasonable outcome is achieved.

At the protest, the workers, who are members of SIPTU, Fórsa and the Irish Nurses and Midwives Organisation, expressed their deep dismay that the Sisters of Charity did not turn up to talks yesterday (Thursday, 17th September) at the Workplace Relations Commission and vowed to keep going until an enhanced redundancy package already recommended by the Labour Court is paid.

SIPTU Shop Steward, Liz Meade, said: “The campaign must continue. We will not give up on our struggle for fairness. Some of us took care of countless vulnerable people both in the nursing home and in the day service on behalf of the Sisters of Charity for over 30 years and to be left high and dry like this is an absolute scandal.”

SIPTU Industrial Organiser, Damian Ginley, said: “SIPTU representatives again call on the Sisters of Charity to engage directly with the group of unions in a process that can find a solution acceptable to the workers. The sudden closure of this nursing home along with silence from the Sisters of Charity has left a bitter taste for all members.

These are the same people, some of whom have given their entire working lives to the Sisters, who went above and beyond the call of duty to protect some of the most vulnerable in our society during the Covid-19 pandemic.

For these workers be left out in the cold after years of loyal service is very difficult to accept so our members will continue to fight until justice is achieved.”

SIPTU members in the St. Vincent’s Centre in Cork City are to transfer their employment to the COPE Foundation, which will result in improved terms and conditions of work and the maintenance of its vital services for residents.

SIPTU Organiser, Sharon Cregan, said: “This move will bring to an end a long period of uncertainty for the staff employed at the centre which cares for women with intellectual disabilities. The issue emerged in early 2017 with disagreement between the HSE and Sisters of Charity over who was responsible for the staff when the centre was de-registered.

“The Section 39 organisation was governed by the Sisters of Charity until the HSE stepped in in March 2017. Within months, HIQA published a report on foot of a visit to the centre which identified major non-compliance issues in key areas. These issues have been resolved and with the agreement which has been reached for COPE Foundation to assume the operations of the service the future of the workforce is also now ensured.

“Throughout this time the staff maintained continuity of service. The staff have worked with the residents for many years. They know them and wanted to ensure their wellbeing and that they could live as independently as possible.

“We received today (Thursday, 3rd September) correspondence from the HSE inviting both SIPTU and the INMO to meet its representatives on Thursday next, 10th September, to commence discussions and negotiations in relation to the impending transfer. At this meeting union representatives will be ensuring that this transfer of undertakings progresses successfully.

“The COPE Foundation is a Section 38 organisation. As such it is funded to provide a defined level of service on behalf of the HSE and will provide workers with improved terms and conditions of employment.”

She added: “The transfer of these services to the COPE Foundation is a very welcome development which should ensure the best outcome for the workers and residents of the St Vincent’s Centre.”

SIPTU Ambulance Sector Organiser, Miriam Hamilton, said: “Since the beginning of the pandemic, our members in the NAS have gone above and beyond the call of duty to provide a full emergency service in communities across the country. Our members also took on a substantial amount of additional and crucial roles to swab and test for Covid-19. They have visited people’s homes, residential services, meat factories and established pop up testing facilities in communities to stop the spread of the coronavirus. This is no way to treat these loyal and dedicated workers who have been on the frontline from day one.”

She added: “It is deeply frustrating and of great concern that the NAS management has today advised us that due to staffing shortages in the payroll department emergency medical technicians in Intermediate Care Services will only get basic pay, with no shift pay or overtime. It’s not acceptable. Our members working on the frontline are essentially being financially penalised for the failure of the HSE to recruit vital frontline staff into the service.”