The men who printed the Proclamation

The men who printed the Proclamation — the printer or pressman Christopher Brady, and compositors Liam O’Brien and Michael Molloy — were ITGWU employees producing The Workers’ Republic and workaday union print jobs.

So dilapidated was it — and short of type, despite Andy ‘Dazzler’ Mulligan fetching some from West’s printers — the Proclamation could be printed only one half at a time, and several typefaces had to be used. Connolly gave them the option of not being involved as they worked overnight on Easter Sunday, under ICA guard commanded by Lt William Partridge, an ITGWU organiser.

They chose to carry out the task, fully aware of its historic significance.

When printed, the Proclamation was “parcelled up and delivered to Miss Helena Molony”, ICA member and Secretary of the Irish Women Workers’ Union, then effectively part of the ITGWU. The three printers went on to fight in Easter Week: Brady with the ICA in City Hall; Molloy and O’Brien with the Volunteers in Jacob’s and St Stephen’s Green.

In 1934, ICA veteran Nellie Gifford recalled: How faithfully those three men had fulfilled their trust. They took the risk of setting up and printing what others who only posted up paid for with their lives.

Having done the task assigned them, they returned to the quiet, unspectacular work of earning their living.

Their courage and their patriotism is, however, now part of our history, for they had a special part in ushering in the Irish Republic.

It is hoped that when every school student learns of the Proclamation, they will hear the names Brady, Molloy and O’Brien — even Joe Newman who assisted them and Dazzler Mulligan — and of course Liberty Hall and the ITGWU.

Brady went on to work for the Bank of Ireland, Molloy in the Freeman’s Journal and O’Brien in O’Reilly’s. The DTPS, on a motion of the Irish Independent Chapel, honoured them with a presentation dinner in the Ormond Hotel on 8th December, 1916.

At Easter 1916, the men who printed the Proclamation should be recalled as workers — no Proclamation would have been possible without their ingenuity and inventive skill; as courageous soldiers, for they acted effectively as such both during the printing and in the weeks and years that followed; and as employees of the union.

For Brady certainly, the Ireland he fought for was the workers’ republic, and that is evident in those elements of the Proclamation that vested Ireland in the hands of its people and spoke of equality — concepts and phrases expressed in the Constitution and in the ambition of Connolly and the ICA.

When the Proclamation is draped from Liberty Hall as part of the 1916 tapestry, it should be remembered it was first printed by union members employed by the ITGWU.

To commemorate the role of the ITGWU and the ICA in the 1916 Rising SIPTU Health has commissioned a limited number of wood carvings. SIPTU Shop Stewards can make an application for one of three special 1916 wood carvings by emailing us healthdivision@siptu.ie or calling the office on 01 8586466. 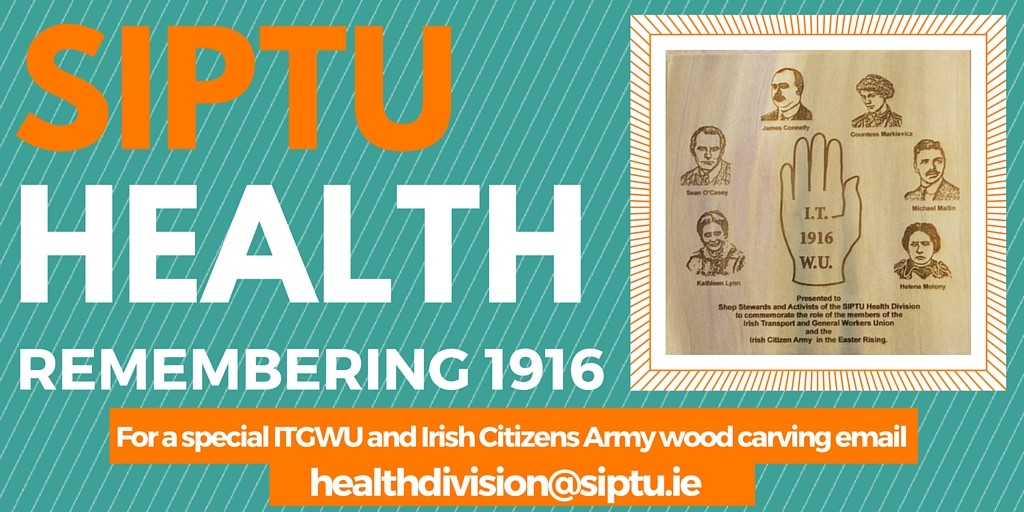