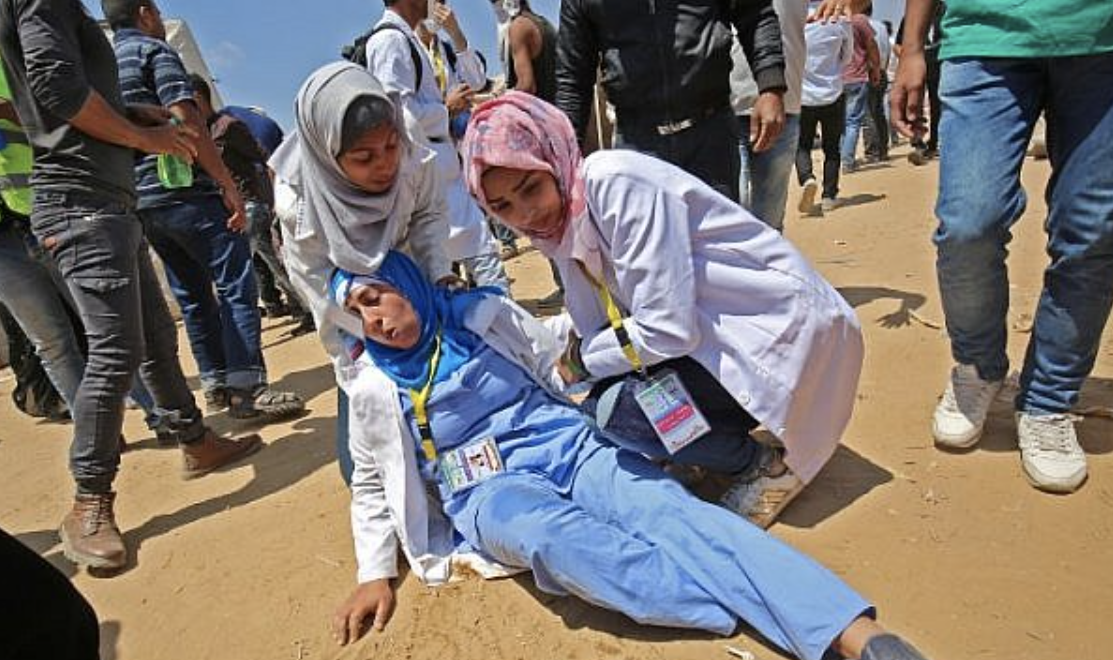 World health agencies outraged by the killing of Razan An Najjar

Thousands of people gathered in Gaza yesterday (Saturday, 2nd June) for the funeral of Razan al-Najjar, a 21-year-old Palestinian woman, volunteering as a first responder with the Palestinian Medical Relief Society (PMRS).

According to health ministry spokesman Ashraf al-Qudra, Najjar was a volunteer with the ministry, wearing the white uniform of a medic when she was shot in the chest at a protest near Khan Yunis on the border fence with Israel on Friday (1st June).

At her funeral, health workers dressed in white uniforms, marched in her procession, holding Palestinian flags and photos of her face.  Her father walked holding his daughter’s own medical vest, once white, now stained red with her blood.

Razan’s death has brought the number of Gazans killed by Israeli fire since the end of March to 123 but Najjar is only the second woman to die. The first was a teenage protester.

United Nations officials and agencies have expressed their outrage in the face of her killing.

Reports say Razan was hit by live ammunition fired by Israeli forces while trying, with other first responders, to reach those injured during the ‘Great March of Return’ demonstrations close to Israel’s perimeter fence around 18:30. She was taken immediately to a trauma stabilization point, and then to the European Gaza Hospital, where she died just after 19:00. Three others on her team were also injured.

“Healthcare workers must be allowed to perform their duties without fear of death or injury,” said the Humanitarian Coordinator, Jamie McGoldrick. “The killing of a clearly-identified medical staffer by security forces during a demonstration is particularly reprehensible. It is difficult to see how it squares with Israel’s obligation as occupying power to ensure the welfare of the population of Gaza.”

#Humanitarian Coordinator, @WHO, @UNHumanRights, and @ochaopt deeply concerned over killing of health volunteer in #Gaza and call for the protection of medical workers https://t.co/RV6b3bFBqV pic.twitter.com/GWdMzF0sQB

These latest incidents come on top of an already-staggering number of attacks on healthcare personnel reported between 30 March and 27 May: 245 health workers and 40 ambulances have been affected by such attacks, according to data provided by the Palestinian Ministry of Health, the Palestinian Red Crescent Society, PMRS and the Union of Health Work Committees. Many of these were hit by live ammunition.

James Heenan, Head of Office, Office of the United Nations High Commissioner for Human Rights in the occupied Palestinian territory (oPt) said: “Reports indicate that Razan was assisting injured demonstrators and wearing her first responder clothing, clearly distinguishing her as a healthcare worker even from a distance”

“She was shot about 100 metres from the fence. Under international human rights law, which applies in this context along with international humanitarian law, lethal force may only be used as a last resort and when there is an imminent threat of death or serious injury.

It is very difficult to see how Razan posed such a threat to heavily-armed, well-protected Israeli forces in defensive positions on the other side of the fence.” Attacks on medical teams in Gaza not only risk the life and health of staff and patients but also undermine the overall capacity of Gaza’s health system, which is already suffering from chronic underfunding and massive pressure, compounded by the more than ten years of blockade.

The World Health Organization (WHO) has called for the protection of health workers and patients at all times. Dr. Gerald Rockenschaub, Head of the WHO office in the oPt, said: “Today, our thoughts are with the family of Razan, and with our colleagues from the PMRS. Such attacks on health care must not happen and we need to enhance our efforts to ensure the protection of our frontline health workers.”

There are clear obligations to safeguard healthcare under international law and these must be respected.”

Last month, Razan al-Najjar was interviewed in Gaza. She was one of the only female medics responding to medical emergencies during the protests.

“We have one goal — to save lives and evacuate people,” she said in the video. “And to send a message to the world: Without weapons, we can do anything.”

In the interview, Najjar said that Gaza needed more female medics like herself.

“The strength that I showed as a first responder on the first day of protests, I dare you to find it anyone else,” she said.