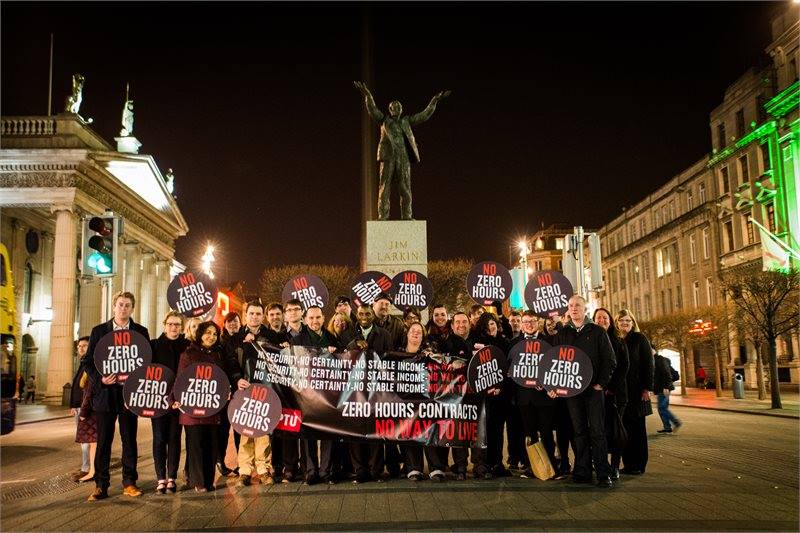 Precarious work in Ireland is not new. Since the foundation of the ITGWU over 100 years ago and later SIPTU, it has been an almost constant feature of the Irish labour market over the past 100 years.

Casual labour on the docks in Dublin since the turn of the 20th century, agricultural labourers working across thousands of Irish farms, the emergence of fixed-term workers in the 1990s and work- place innovations that saw the development of the temporary agency worker in the early 2000s and more recently, ‘if and when’ contracts.

Each time, the union movement has responded by organising workers in those sectors and in latter years ensuring that legislative protections are put in place to create a level playing field between permanent and insecure workers.

What is new is that precarious work is now emerging in sectors previously thought unimaginable such as third level education and that for some sectors, particularly those that rely on digital plat- forms, their business model or the very basis of their business de- pends on precarious work practices to operate and survive.

We know from the CSO’s labour force survey data that in the education sector, just one in eight workers were on temporary contracts in 1998. This rose to one in six in 2014 and was one in seven in 2017. If we were to specifically take third level education employment alone, those figures would be much worse.

By its very nature, the concept of precariousness is hard to define. We combine various definitions used such as uncertainty of hours and tenure and vulnerability with regard to amount and frequency of pay.

However, the numbers only tell part of the story. This is where some commentators fall into the trap that if it isn’t measured, they don’t believe it. Well the reality is that there is no full comprehensive measurement for what we believe to be precarious work. And the reason for that relates to the issue of risk.

Risk is the defining characteristic of insecure work and the greater the risk or responsibility borne by the worker as opposed to the employer for a worker’s security of income, stability of employment and access to social security, the greater the precariousness of that job.

Not all insecure work, such as self-employment, is necessarily precarious; similarly, as we know from the dependence on the Family Working Payment (formerly FIS), not all full-time permanent work guarantees adequacy of income.

Our lack of understanding of self-employment is one of the biggest obstacles to understanding precarious work although we get some insight from Revenue Commissioner data.

In 2016, some 41% of Class S PRSI contributors (self- employed not including proprietary directors). They had a gross income of €20,000 or less.

In that context, no single type of work or occupation can be classified as precarious. However, we understand that those in full-time temporary employment and those reported as being in part-time under-employment are at most risk. CSO labour force survey data suggests that in 2017 just over 175,000 workers found themselves in this situation.

Alongside this, the Department of Social Protection has produced a very conservative estimate of 7,500 workers in disguised self-employment, a figure many at the coalface of organising in the construction sector would contest as too low.

The focus on precarious work to date has been on workers’ lives and rightly so. TASC’s recent re- port Living with Uncertainty excellently details the day-to-day lived experience of those working in precarious jobs and the adverse implications arising from this type of working life for housing security, self-care in terms of health and family formation decisions.

Similarly, there has been a lot of research undertaken internationally on the lifetime impact of initial work conditions when young workers enter the labour market.

Well-known work by Autor and Houseman (2010) in the US looked at the so-called stepping stone effect from temporary agency work and fixed-term contract work into permanent work and the initial work experience on employment prospects and lifetime earnings.

Compared with fixed-term contracts, those in temporary agency work had a lower probability of getting permanent employment and endured a larger earnings penalty over a longer period.

CSO’s labour force data tells us that the share of young workers aged 25-34 in temporary work has been edging up over the past two decades.

With regard to part-time work, almost one-quarter of all those in employment in 2017 under the age of 35 were in part-time employment, up from less than a fifth (18%) back in 2008.

If we consider that a share of younger workers is combining work and study, this figure alone need not give cause for alarm, provided young workers have access to consistent hours and decent pay, irrespective of the contract type.

However, 10% of those aged 24 and under who are working part- time reported being under-employed. It is these workers that we regard as being in a particularly precarious work situation.

While we don’t know the precise reasons for that underemployment, there are strong grounds to believe that this is part of the exploitative culture in certain sectors where ‘if and when’ contracts and variable hours exist.

When employment began to recover in 2013 and 2014, a key feature of that recovery was an increase in the availability of temporary and part-time work.

Five years on, almost all new jobs are in full-time employment, giving rise to a debate in some quarters as to whether insecure employment was merely a temporary feature of the recovery. It is not.

Technology and the increasing concentration of market power by companies in certain sectors means that the power balance between workers and employers is greatly skewed.

In that context, precarious and insecure work will remain part of the workplace landscape. Overcoming it requires stronger unions and more collective bargaining – something SIPTU members are striving for every day.

In October, James Bloodworth will speak to SIPTU Health Division members at the Division’s biennial conference about his book on Precarious Work. Hired: Six Months Undercover in Low-Wage Britain.