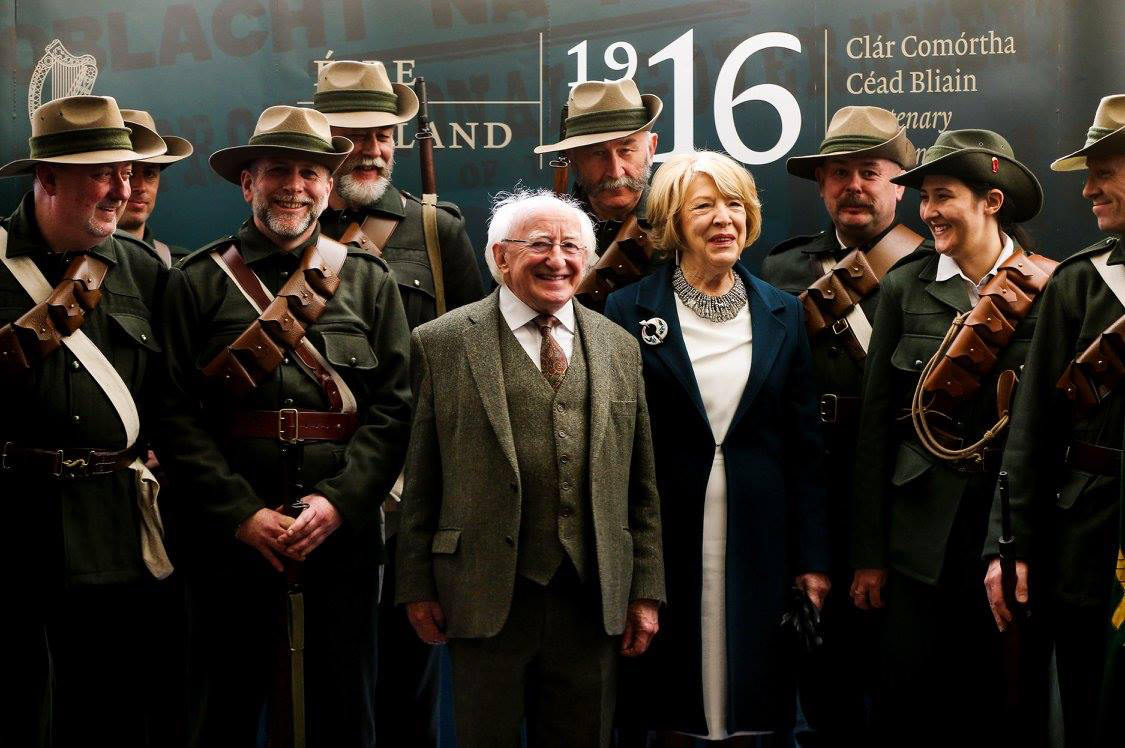 The last seven years have been eventful ones for our union and our country.

To the fore for both has been President Michael D Higgins, who has placed progressive causes and commemorating the history of the labour movement high on his agenda during his time in Áras an Uachtaráin.

From the launch of his campaign to become President in October 2011, when he batted away a hostile question from one journalist from the right-wing press with the putdown “being called independent and having independence of mind are two different things”, it was clear he was not going to shy away from his lifelong allegiance to progressive politics.

As a long-time SIPTU member and trade union activist, Michael D made sure that the role of the socialist and labour movements was given their rightful place during commemorations of the Dublin Lockout of 1913, the 1916 Rising as well as the First World War.

Labour Rights and the Rising

Among the commemoration events, the President attended was the unveiling of the Green Flag of Ireland hoisted over Liberty Hall in the lead up to the Rising. The flag was loaned to the union by the Inniskillings Museum in County Fermanagh, Northern Ireland. It had been captured by members of the Royal Inniskilling Fusiliers from a ruined Liberty Hall in the aftermath of the Rising.

The first major event of the SIPTU calendar of commemorations was the showing of the iconic films Mise Eire and Saoirse? in Liberty Hall on Sunday, 13th March, which featured a presentation by President Higgins to the director of the two epics, George Morrison. He also attended a gala concert on Easter Saturday, 26th March, in Liberty Hall featuring Christy Moore, Damien Dempsey, Karen Casey and other performers.

On Easter Tuesday, 29th March, President Higgins laid a wreath at the statue of James Connolly opposite Liberty Hall on Beresford Place in a State commemoration of those who lost their lives fighting with the ICA in Easter week 1916 and in the executions that followed.

IN October 2016, Sabina Higgins took to the Liberty Hall stage in James Connolly’s short play Under Which Flag?. It was just one aspect of the very active role that the wife of the President has taken in the cultural life of our union.

Sabina has often attended SIPTU associated events with her husband in his presidential capacity. However, just as regularly she has visited Liberty Hall or attended union events in her personal capacity or as an active member of Irish Equity, the SIPTU affiliated union for actors.

She was awarded life membership of Irish Equity earlier this year.

Sabina Higgins attended the Jim Larkin commemoration in Glasnevin Cemetery on Sunday, 2nd February 2014. Later that year she was present at the official opening of the Rosie Hackett Bridge which crosses the Liffey under the shadow of Liberty Hall.

Call for action for precarious workers

A NEW progressive ideology must be developed to help organise those in casual and precarious employment into a force that can change society for the better, President Michael D Higgins declared in early 2015.

His strong call for action for workers in precarious jobs came in a speech delivered on 26th February 2015, in the Royal College of Surgeons in Dublin, to commemorate the role of Irishman Edward Joseph Phelan in establishing the International Labour Organisation.

In the important address, the President rubbished the neo-liberal ideology which has “underpinned the systematic deregulation of national systems of labour and the promotion of competition between them”.

He said such an approach had not only led to economic disaster but also created a new class of worker, the “precariat”, which “is defined by partial involvement in labour combined with extensive ‘work-for-labour’, that is, a growing array of unremunerated activities – often internships of various sorts – that are required to get access to remunerated jobs.”

The speech by the President played an important role in beginning a national debate on the spread of precarious work practices throughout many sectors of the economy. He said: “The shift towards precarious employment is far from being confined to low- skilled jobs.”

He added: “In Ireland today, a considerable volume of teaching and research work is carried out by ‘temporary lecturers’, ‘adjunct lecturers’, and so-called ‘teaching assistants’ who have no job security at all and must repeatedly resume their elusive and exhausting hunt for the next short-term contract.”

Highlighting the fight for global justice

During his years as an activist and politician the President was strongly focused on international justice issues. And President Higgins has maintained this keen concern throughout his seven years in the Aras.

He has made a number of state visits where he has highlighted struggles for justice including during his tour of Latin America and Cuba in 2017 and when visiting a refugee camp in Greece earlier this year.

While in South Africa in November 2014, President Higgins visited the Apartheid Museum in Johannesburg. This visit inspired the hosting of a Nelson Mandela exhibition in Kilmainham Gaol in Dublin, to commemorate the 100th anniversary of the birth of the late South African President and 25 years of diplomatic relations between Ireland and South Africa.

At the opening of the exhibition in July 2018, the President highlighted the strength and breadth of Ireland’s relationship with South Africa, from support for the anti-apartheid movement to the vibrant partnership which exists between the two countries today.

In his speech, President Higgins praised the Dunnes Store strikers action as “a touchstone moment of the protest against apartheid in Ireland” and emphasised the power of workers to bring about political change. He said: “In July 1984, a group of workers mainly young women, in Dunnes on Henry Street, took a moral stand and refused to handle produce imported from South Africa. It was an utterly selfless act.”

He added: “The power of their protest and principled stance eventually led the Government of Ireland to ban South African goods from being sold in Ireland, and this ban remained in place until the end of the apartheid regime.”

Weaving the story of the 1913 Lockout

PRESIDENT Higgins worked closely with the union in commemorating the Great Dublin Lockout of 1913. In November 2012 he visited Liberty Hall to launch the SIPTU Lockout Tapestry project commemorating the struggle which defined the early years of our union.

At the launch, he said: “It is through the power of collective action that the workers of the Irish Transport and General Workers’ Union sought to establish their right to organise to secure a better deal for the ordinary workers of Dublin, and it is very fitting that it is through collaboration that they are being remembered.”