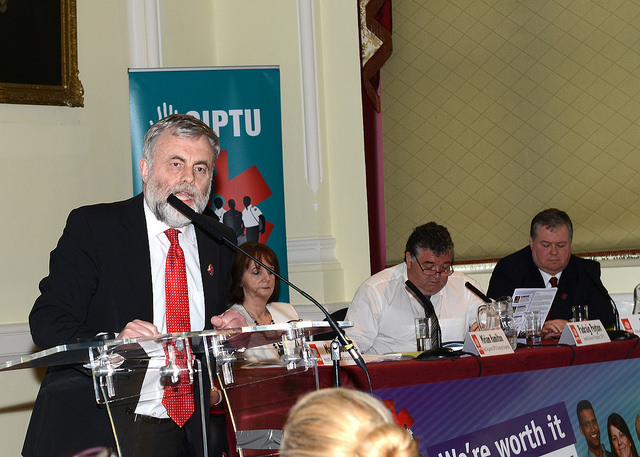 A new and more brutal phase of capitalism

As we go to press two major disputes which go to the very core of the reason we must organise the unorganised are about to commence. They arise in two different sectors of the economy but they are both entirely attributable to the fact that the trade union movement, hamstrung by its nineteenth century structures has not been able to organise new entrants to the relevant markets.

The Tesco dispute is about the imposition of grossly inferior terms of employment on a minority of its workforce who have the longest service. The retail grocery sector is now increasingly populated by non-union players who do not apply the decent trade union negotiated terms enjoyed by the longer serving Tesco workers. Low pay and zero-hour contracts have increasingly become the order of the day.

In some respects the Bus Éireann dispute is different — but the core problem is not. Again, this fully unionised company in which workers enjoy reasonable trade union negotiated terms and conditions of employment has been undermined by the presence of non-union competitors who do not recognise trade unions for the purpose of collective bargaining and who do not apply anything remotely approaching equivalent terms to their workers.

The dumbing down of conditions won over several years of trade union work is the common characteristic of the new and more brutal form of capitalism now in the ascendency in the aftermath of the great global economic collapse of 2008.

It was already well embedded before the collapse as the influence of trade union organisation and collective bargaining was gradually eroded. However, there weren’t too many instances of full frontal assaults on well-established and agreed terms of employment.

Regrettably, these have now become the order of the day as even the ‘good employers’ join in the relentless ‘race to the bottom’ on the quality of jobs. In the primal ‘survival of the fittest’ brutal and turbulent world of modern, post crisis capitalism there is no place for luxuries like decent jobs anymore.

Collective bargaining and the level of trade union organisation required to enable it to take place is the key determinant of the quality of life for the great majority of workers.

It is so because it is in this process and only in it, that workers get to have some say in how the benefits of output are distributed. Even global institutions like the IMF now concede that the exponential growth of inequality which is destroying the very fabric of the economic and social system itself can be directly attributable to the demise of trade union organisation and the erosion of collective bargaining ultimately resulting in the immiseration of working people.

It is not just enough to ‘look after our own members’. It is foolhardy to fail to realise that if we do not organise the competition and bring their employment standards up to the level we have established through years of work in the unionised sectors, they will take our members’ market share through cheaper pricing. Some still think that they will be able to insulate public service jobs from this insidious process. They won’t because the ‘race to the bottom’ affects whole economies — not just parts of them.

There is no easy way. We must win the forthcoming battles in Tesco and in Bus Éireann. But we must go on to address the organising challenge and secure the benefits of collective bargaining for tens and thousands of workers across the economy. It is a battle to win decent terms of employment for those who do not have them, many of whom are increasingly working in conditions not far removed from slavery. But it is also a battle to shore up decent levels of pay and conditions and job security. The key to it all is trade union organisation and collective bargaining.

The great irony is that the legal environment for winning collective bargaining rights in the Republic of Ireland is now better than it has ever been before. Thanks to the painstaking work of the Labour Party in the last Government a number of significant improvements have been achieved. The key instruments which protect the pay and conditions of tens of thousands of lower paid workers in industries such as security and contract cleaning as well as others, the Employment Regulations Orders (EROs) and the Registered Employment Agreements (REAs), were reinstated after they had been struck out by the courts. On top of this a completely new instrument was put in place — the Sectoral Employment Order (SEO).

This enables workers to win improvements in pay and conditions of employment and make them legally binding on all the employers across a whole industry, sector or occupational category, without ever having to fight an industrial dispute for recognition. All that is required is to persuade enough of the workers in the relevant industry or occupational category to join a trade union so that it can demonstrate to the Labour Court that it is “substantially representative”.

In addition to that the new Act, which was passed in July 2015, also provides a way in which the workers in an individual employment can achieve improvements in pay and conditions that are legally binding on the employer, without having to run the gauntlet of an industrial dispute to achieve recognition. That piece of legislation also includes extensive protection against victimisation for seeking to persuade fellow workers to join a union.

(Actually, Ireland was the only country in the world to enact legislation increasing collective bargaining rights for workers against the background of the economic collapse of 2008. Indeed, these rights have been under sustained attack in all the so-called programme countries and many others).

However, if the trade union movement is to fully avail of these new legal provisions and assist those who are not yet organised to do so on a sufficient scale to really begin a fight back for ‘decent work’ it will have to change itself. We cannot hope to win the battles of the 21st century with the infrastructure of the 19th.

That is why we must take our courage in our hands and press ahead with the implementation of the recommendations of the report of the Commission on trade union organisation which was adopted in two parts, virtually unanimously, at the ICTU BDC in July 2011 and July 2013. This envisages a new united movement entailing all unions cooperating together to link collective bargaining and organising and deploying resources on an unprecedented scale in a battle to win for workers. The report also envisaged this unprecedented co-operation on the industrial and organising fronts being supported by a greatly more resourced Nevin Institute to challenge the other side in the development of ideas, a new workers college to reinforce the principle that equality is not only morally, but economically superior so as well, a trade union media platform to challenge the hegemony of the other side in the dissemination of information and the establishment of joint trade union centres in every county which are open and available to provide advice, information and assistance to workers.

Regrettably, unions have been pre-occupied with their day-to-day work and insufficient progress has been made on the project. Meanwhile, those driving the race to the bottom, dismantling decent jobs, have been relentlessly active in filling the vacuum. Working people, not least those in Tesco and Bus Éireann, are faced with having to fight battles they shouldn’t have to fight and many, many others are facing worse. Its way past time to wake up and smell the roses!