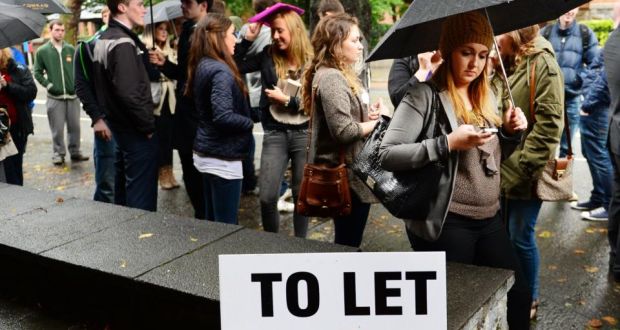 The pipedream of owning a home

What do young workers want?

For a number of years now, we have been told that compared with previous generations, those born after 1980- the so-called millennials are seeking out something different- whether it be “purpose” in their jobs, flexibility to maintain a healthy work-life balance or co-living arrangements.

Yet a number of well-conducted studies in the US conclude that young workers today typically share the same aspirations of previous generations.

Behind all this hype, each worker, whatever their age, requires the basic dignity and decency of having a permanent roof over their heads. And nowhere are the problems associated with precariousness and low paid work more evident than in the area of housing and the capacity to access affordable housing with a certainty of tenure and price, particularly in the main urban areas in Ireland today.

We looked at the CSO’s historical earnings data and national house prices from the Department of Housing, Planning and Local Government’s database going back almost forty years and we were able to use earnings per age data to establish housing affordability per age.

Over three decades ago back in 1986, a young worker aged between 25 and 29 earning average wages for his or her age cohort was facing house values worth 4.7 times their annual income.

Twenty years on, that ratio has jumped to 11.92 average. This ratio obviously fell during the crash and in 2017, that ratio is back up to 11.1 in terms of house prices to earnings.

For today’s average young worker, the prospect of being able to buy a house with their own resources anytime soon is remote.

For young workers in precarious jobs, that prospect is even more distant, the difficulties of affordability compounded by a set of rules that require consistency of income.

And those prospects become even more remote as house prices continue to far outpace the increase in real wages. House prices are increasing almost five times the rate of wages in this country and we can only assume that this ratio is getting worse with each passing year.

During the boom years, we know that cheap credit stepped in to meet homeownership demand. But with tight macroprudential rules, what lower paid and middle-income young workers do now?

Depend on the private rental housing market for their long-term housing needs? For a lucky 25% of first-time buyers, the impossible becomes possible with the help of a gift from parents to help with their mortgage deposit.

We know from the TILDA project on ageing in Ireland that in their wave three survey over 4000 older (aged 54+) persons, that some 48% of older adults provided financial assistance to their children.

The intended purpose of that gift is not clear, however 2013 research published by the Social Market Foundation in Britain on parental transfers to children found that across four surveys, cash transfers are made in lower income families as well as higher income families.

The main difference was that on average lower income household transferred cash for every day consumption as opposed to strategically planned life events such as the purchase of a house. In effect, older higher income generations helping younger generations to buy assets or capital further reproduces inequality within generations.

No official data on housing down payments is available but we can rely on the 2017 work of Central Bank economists Kelly and Lydon that looked at loan data from residential mortgage books within certain Irish banks.

In the CSO’s household consumption and finance survey in 2014, they identify that almost one quarter of first time homebuyers had an inheritance. The median inheritance of €10k (mean €21.3k) was equal to around 50% of the value (2008-2014) of deposits on mortgaged homes for buyers under 40 at the time of purchase.

For the remaining 75%, those that are low or average wages, the future in terms of their housing needs is bleak. Currently, the average worker spends just over 50% of their disposable income on private rent for a one bed apartment in Dublin, with little or no scope of being able to save for a deposit.

Longstanding calls for better rental rules to enable long term tenancies and greater security of tenure must be enacted. But these will only go so far. We all know by now that increased supply is the only solution.

However, the economics of the housing market and the market control exerted by developers means there will no major glut of housing supply any time soon. It is a misplaced expectation that an increase in housing supply will dramatically reduce house purchase prices. The affordability problem for both house purchase and private rental will remain.

In that context, we need to get away from the mindset of thinking about delivering social, affordable and private housing separately. Any basic understanding of the housing market suggests that we need to develop all three in tandem. For it to be financially sustainable for the State, market rate and affordable rate rents need to cross-subsidise the social.

Recall this is not about a once-off boost to housing supply- estimates suggest we need somewhere between 35,000 and 50,000 dwellings per annum between now and 2040 to meet future population demand.

The State can and should get involved in building housing.

It has the land; the Government itself admits it has 1,700 hectares alone in State agency and local authority control, it has the access to the cheap credit and it has the space within the fiscal rules.

An edited version of this article appeared in the Irish Times on Friday 10th August.