Raise the Roof on 3rd October

It is no exaggeration to say that the housing crisis is damaging the lives of hundreds of thousands of people and their families.

As with any crisis it is working people, those on low and average incomes who suffer the most. Buying your own home is now beyond reach for a generation of young people.

The shortage of public, social and affordable housing means that tens of thousands are forced into the rental sector.

Rents are increasing, as landlords take advantage of the supply shortage despite the government cap in some parts of the country. Young workers and students find it almost impossible to find decent accommodation at affordable prices.

Families are forced into homelessness because rents are too high or because they cannot meet their mortgage repayments due to financial difficulty.

They are then forced into unsuitable accommodation in hotels or emergency hubs. A generation of children will grow up without knowing what a normal home is like.

The housing crisis is a perfect storm.

Unlike natural disasters such as hurricanes and earthquakes, however, it is one that was foreseeable and avoidable. It can also be fixed if there is the political will to tackle the vested interests that benefit from this state of affairs.

That requires the Government, in particular, to recognise the scale of the crisis and to accept that property developers, builders and private landlords, whose primary motivation is to make profit, will not resolve it.

The current estimates of housing need are restricted to the numbers of households that qualify for social housing. This currently amounts to 85,799 households on local authority lists.

This, however, does not include tenants who are in the private rental sector in receipt of social housing supports like the Housing Assistance Payment (HAP) and the Rental Accommodation Scheme (RAS). The HAP and RAS schemes are also very poor value for money as the State is handing over almost €750 million a year to private landlords.

They also deepen the rental and housing crisis by adding to demand rather than supply. The housing crisis is a crisis of supply, but it is the lack of social and affordable supply that is at its heart.

These tenants do not have security of tenure, as they can be evicted by landlords with little notice and are therefore still in housing need. The official figures do not include homeless households, those in direct provision, in domestic violence refuges, who are all clearly in housing need.

There are approximately 35,000 home owners over 360 days in arrears on their mortgage, and who are also clearly in distress. The real social housing need extends to some 185,505 households, over double current estimates.

The latest proposal from government for a Land Development Agency (LDA) demonstrates clearly that the Government, and Fine Gael in particular, is still wedded to the false belief that the private sector can deliver the affordable, quality and secure housing to which every citizen is entitled.

While it claims that the LDA will deliver 150,000 new homes over 20 years, it concedes that none will completed before 2020. The proposal also involves the State handing over public land to private developers who will then be expected to deliver ‘up to’ 30% social and affordable housing on each project.

The cost of the affordable homes will be unattainable for many as wages and salaries struggle to keep up with property costs.

Over the past decade the State through the National Asset Management Agency has sold lands on which over 50,000 social and affordable homes could have been built.

Much of these lands remains idle as their private owners wait for prices to increase before they build on them or sell. Receivers handling NAMA controlled properties continue to sell land to the highest bidder instead of releasing them to meet public demand.

There is increasing acceptance, including by the State’s own research bodies that a core solution to the housing crisis is for the State to build more social and affordable housing in the form of new public housing in well planned, mixed income communities.

This can be achieved through cost rental and other forms of social and affordable provision delivered and managed by local authorities, co-operatives and a new housing agency and including the use of compulsory purchase orders to take over vacant buildings and sites.

A new alliance comprising the trade union movement, women’s organisations, students and the housing and homeless agencies have come together to demand radical action to address the crisis. A ‘Raise the Roof’ rally in support of a Dáil motion calling for such a programme for the construction of quality affordable public housing, to prevent evictions and to enshrine the right to housing in the Constitution, will be held at Leinster House on Wednesday 3rd October.

It is essential that a powerful message is delivered to those in power who continue to put private interests before the public good in the delivery of homes. 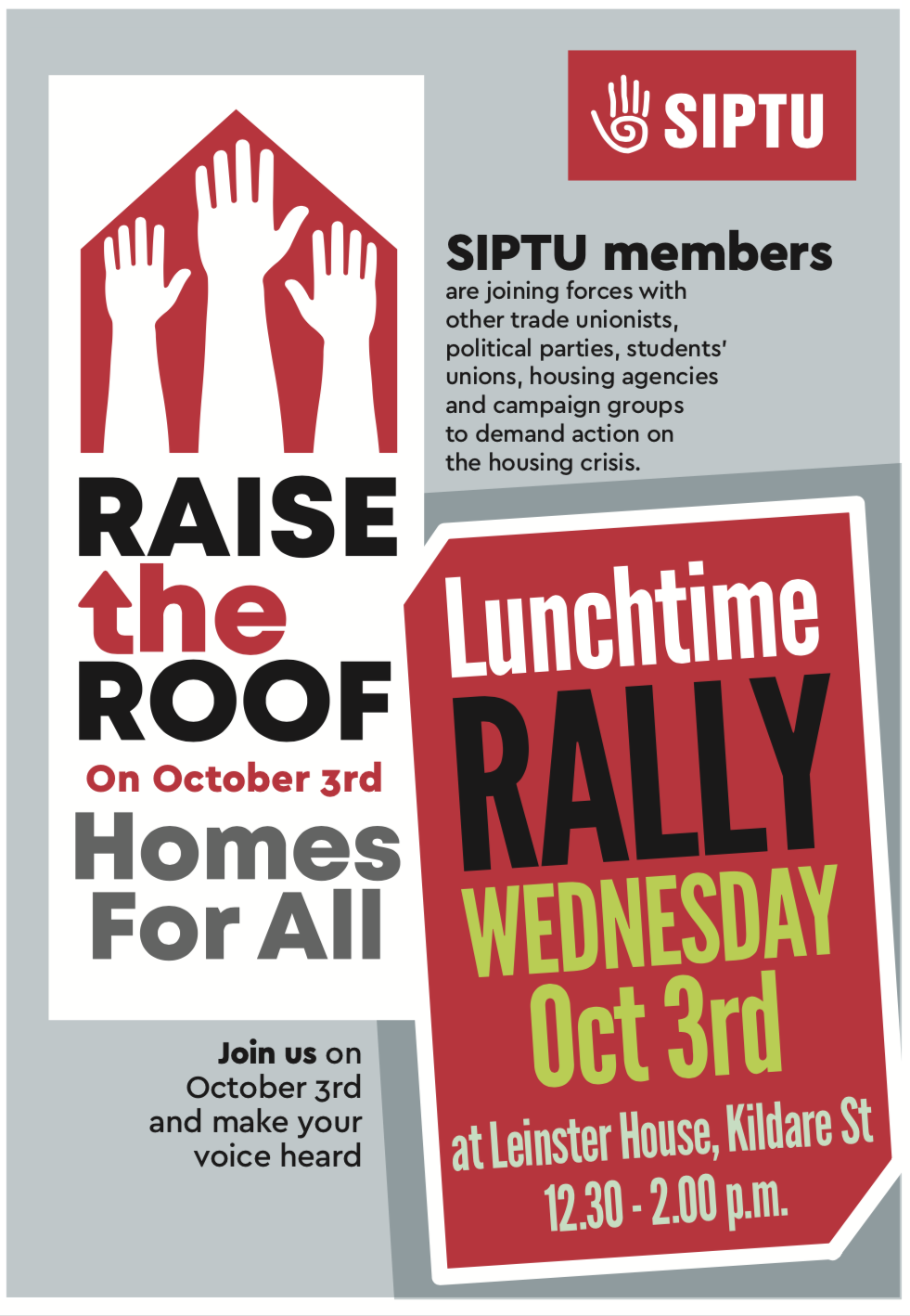