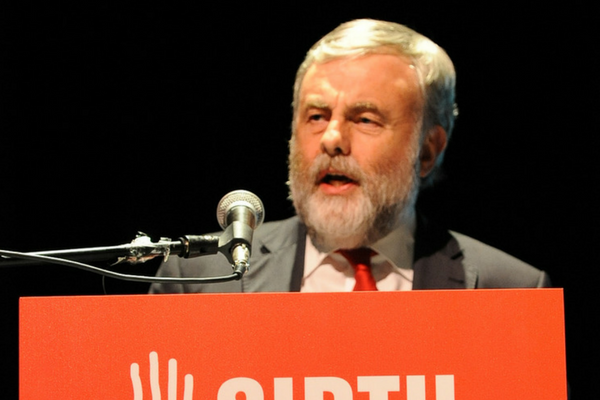 Back on the Offensive by Jack O’Connor

SIPTU is deeply involved in the work of the Private Sector Committee of the Irish Congress of Trade Unions (ICTU) and fully supports the call to ramp up pay increases to 4% from next year. This demand runs in parallel with our campaign to leverage accelerated pay restoration in the public service. More- over, it is entirely consistent with the industrial and political strategy we have pursued since the economic collapse of 2008.

When the scale of the crisis became apparent we moved to conclude negotiations on what became the National Transitional of the Collective Bargaining infrastructure Agreement of 2008.

This was to become the last of the Social Partnership agreements, which extended back to 1987, when the employers and the then Government reneged on it in January 2009. This was followed by the most savage assault on working people in the history of the State throughout 2009 and 2010.

It became apparent by the end of 2009 and early in 2010 that the trade union movement was not strong enough to win the battle at that time. When one side recognises in any war situation that it is not strong enough to storm the ramparts of their opponents, without getting their own side slaughtered, they do the next best thing. They build whatever fortifications they can to hold as much ground as possible and await more favourable conditions to go on the offensive again. This is precisely what we did from the end of 2009, early 2010 onwards. It was an horrendously difficult and decidedly unpopular strategy.

The key fortifications that we, along with others in the wider trade union and labour movement built were; the ‘Protocol’ in the Private Sector, the Croke Park Agreement and its successors in the public service and a political strategy to prevent the centre right parties from obtaining an absolute majority of power in the 2011 General Election, when the Troika was essentially in control of the country’s finances.

Our objectives were very clear; to prevent the bargain basement sale of state assets, to prevent outsourcing of public service jobs on an industrial scale, to maintain the essential infrastructure of our social welfare system, to avoid anti-trade union legislation and to maintain the essential elements e.g. the Registered Employment Agreements (REAs), Employment Regulation Orders (EROs) etc.

Meanwhile, we worked with others within the ICTU on the Commission on Trade Union Organisation which was established as a result of a motion moved by our union at the ICTU Biennial Delegate Conference (BDC) in 2009 to try to bring about a much more powerful movement. The ultimate report which was adopted by the BDC 2013 in Belfast envisaged a much more powerful Congress co-ordinating collective bargaining and organising across each industrial sector of the economy, supported by a greatly strengthened Nevin Research Institute, a new Workers’ College, a trade union newspaper or media platform and the opening of joint trade union centres in every county. (Whereas the recommendations were adopted virtually unanimously it is now clear it will take longer to bring them about than originally envisaged).

Thus far our objectives have been largely achieved.There has been no sell-off of state assets except for the energy generating component of An Bord Gais, the minority shareholding of Aer Lingus and the Lotto.

Whereas the outsourcing agenda in the Public Service is still being aggressively pursued by some, it has been considerably contained as against what would have un- folded otherwise. We have succeeded in avoiding any compulsory redundancies in the public service.

While there have been cuts, the core infrastructure of the social welfare system has been maintained to the extent that there have been no cuts in the basic rates since the beginning of 2011. We have avoided anti-trade union legislation. While our REA and ERO mechanisms were struck out by the courts (twice) we have managed to get legislation enacted, through the efforts of the Labour Party, to get them largely reinstated. Indeed, they have been augmented with the introduction of a new mechanism called Sectoral Employment Orders (SEOs) providing for legally binding agreements across whole industries or sectors.

Moreover, as a result of that same legislation, it is now possible for workers to organise themselves in a trade union and to go on to obtain improvements on pay and conditions of employment which are legally binding on their employer even though the latter refuses to recognise the trade union for the purpose of collective bargaining.

Against the background of a gradually recovering economy we are back on the offensive. We have been achieving pay increases ranging from 2% — 3% per year, well ahead of inflation, across the manufacturing sector, in some cases extending back to 2011.

In private sector services we have concluded legally binding agreements providing pay increases for tens of thousands of workers in the security and contract cleaning sectors as well as negotiating improvements for workers in wholesale, re- tail, distribution and insurance and finance.

In the transport sector, we were unequivocal in our support for the Luas workers and the members in Dublin Bus. In aviation, we won a 4% increase by way of a Labour Court recommendation in the Dublin Airport Authority and are now involved in negotiations for a new model agreement.

This is the context in which we declared the intention to commence a national ballot of all our public service members unless the Government opens talks on the acceleration of pay restoration.

When recommending the difficult rear-guard industrial and political strategy we had to follow during the crisis years, we always made it clear that when conditions changed we would go back on the offensive to retake lost ground and that’s precisely what we are doing.